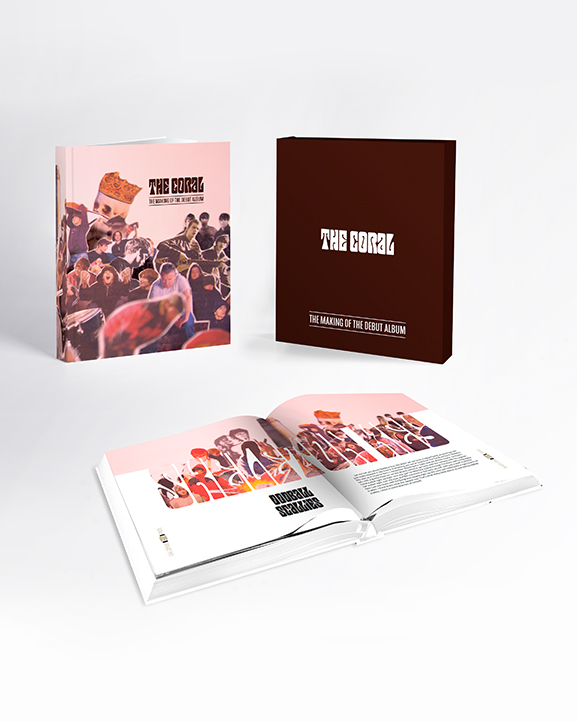 The Making Of The Debut Album by The Coral

This remarkable signed and boxed book is limited to 1,500 copies and tells the story of The Coral's influential debut album.

It was described by NME as being the funniest, most refreshing British debut in years. The Coral’s eponymous debut album remains a totemic release. Sonically unique, wilfully leftfield and thrillingly eclectic, The Coral combined psychedelia with dub, disco groove with pop and ragtime with Egyptian reggae on a remarkable debut that has proved to be timeless.

Twenty years on, that records sounds as fresh and remarkable as it did when it was released on 29th July 2002. The band’s sojourn into psychedelia and folk rock was refreshing and inventive, compelling and precocious. It helped to change the musical landscape, while also adding The Coral’s name to the remarkable inventory of classic British beat bands from Liverpool – a catalogue that began with The Beatles, in whose famed Cavern Club The Coral cut their teeth.

Universal acclaim followed a record described as being a mass of remarkable contradictions while BRIT Award and Mercury Music Prize nominations were duly conferred.

Two decades provide perspective, of course, and The Coral holds up remarkably well – a testament to the band’s invention. This signed, boxed, limited edition volume features exclusive commentary from the band as well as previously-unseen photography as it reflects on one of the greatest records of the new Millennium.

** All books are sent by tracked services,